TREATMENT INCLUDING ANKLE REPLACEMENT AND FUSION

The ankle joint is a hinge between the tibia (shin bone) and the talus (ankle bone). It allows up and down movement. The fibula bone lies on the outside of the joint. The ankle has to bear 5 to 7 times the body weight during day to day activities, such as standing and walking.

Below the ankle is the subtalar joint (the Germans call this the “under-ankle” joint). The subtalar joint, between the talus and heel bone (calcaneus) allows side to side movement.

What is ankle arthritis?

Ankle arthritis can be caused by degeneration (osteoarthritis) or inflammation (e.g. rheumatoid arthritis, ankylosing spondylitis, and psoriatic arthritis). In both cases the cartilage, which is the shiny white gristle that lines and articulates the joint, becomes damaged. This causes bone to rub on bone, which is painful.

Osteoarthritis is usually secondary to damage to the joint, for example as a result of previous fracture, repeated sprains of the ankle, malalignment of the joint or infection.

Excess body weight can overload a joint and worsen the symptoms of arthritis. Every extra kilogram of body weight is multiplied by 5 to 7 times when it is carried by the ankle.

Who gets ankle arthritis?

Anyone can get ankle arthritis. Osteoarthritis tends to become commoner as we get older; nevertheless ankle fractures, repeated sprains, and inflammatory arthritis can cause arthritis to occur at a younger age.

What are the symptoms?

Pain: Pain is the commonest and most troublesome symptom. This is usually made worse by walking. It may disturb sleep. Simple ways to see if your pain is getting worse is to record whether your walking distance is decreasing, or whether you need more painkillers to ease the pain.

Cracking/popping: There may be little pieces of loose cartilage or bone caught within the joint causing this sensation.

Giving way: This may be due to looseness of the ligaments, or secondary to pain.

Swelling: Swelling may be as a result of extra bone, or fluid within the joint. The soft tissues can also inflame and swell.

How is ankle arthritis investigated?

X-rays of the ankle are taken whilst you are standing. This simple test will give the most information on whether the ankle is worn or not.

Blood tests are sometimes used to investigate inflammation, or gout.

Occasionally special tests are needed to determine the extent of the arthritis, or exactly which joint is involved. An MRI scan can give a lot of information on the thickness of the cartilage lining the joint, and whether there are small areas of wear and loose cartilage. CT and bone scans may also be used to investigate ankle arthritis.

Arthroscopy is an operation, (there is a separate information sheet regarding this subject) which allows the surgeon to see the amount of wear within the joint. Arthroscopy can sometimes be used to washout the joint, and help in the treatment of arthritis.

Treatment: With any form of arthritis there are two forms of treatment. The first is without an operation, and the second is with surgery. Most arthritis can be treated without surgery, and only in severe arthritis will surgery be considered.

Non operative treatments: In the first instance simple modifications of the way you lead your life should be tried. These include resting when the pain necessitates, slowing down and altering sporting activities. Weight loss, supportive boots and walking sticks are also useful. Splintage or bracing can sometimes help. The most important and effective non-operative treatment is weight loss.

For many people the arthritis can be controlled by support of the ankle. Supports take 2 forms. Ankle braces, which can be bought from many sports shops. These may be bandages, lace up braces, or even individualised plastic braces that can be made for your leg. These braces can be hot and cumbersome and so HIGH TOPPED, LACE UP boots with a cushioned sole should be tried. Elasticated boots do not give such good support.

Pain killers such as Paracetamol can be effective. Non steroidal anti-inflammatories (NSAID), such as Brufen, Ibuprofen and Diclofenac can reduce inflammation. Patients need to check with their general practitioner or pharmacist that NSAID’s are suitable for them, as they can have side effects, especially if you have asthma, or stomach ulcers.

Dietary supplementation with Chondroitin and Glucosamine, which can be bought in health food shops, may be effective in some patients with early disease.

Physiotherapy and hydrotherapy can help with pain and stiffness.

Patients with inflammatory arthritis are usually looked after by a rheumatologist. Disease modifying anti-rheumatoid drugs (DMARD’s) are used to treat these conditions, in conjunction with painkillers and NSAID’s.

1. Arthroscopic debridement (cleaning out) of the joint:
Cleaning out of the ankle is usually undertaken through an arthroscope. Under an anaesthetic a telescope is inserted into the joint through 2 or 3 small incisions on the front of the ankle. The ankle is washed out with fluid and the loose bits of ‘gristle’ and bone are removed. If there are any bony spurs which block movement, these can be removed at the same time.

This does not reverse the damage done to the cartilage. Patients can be relieved of pain for an unspecified period of time and their stiffness improved. If the symptom relief is worthwhile the arthroscopy can be repeated. A separate information sheet is available on ankle arthroscopy.

The complications of arthroscopy include:

Most problems can be treated by medications, therapy and on occasions by further surgery, but even allowing for these, sometimes a poor result ensues.

2. Fusion of the ankle joint:
Fusion of the ankle to treat arthritis is the “tried and tested”, traditional treatment for severe ankle arthritis. The joint lining is removed and the joint is made permanently stiff, initially with screws, and later by the bone healing across the joint. The medical term for fusing a joint is “arthrodesis.”

Fusion can be done with an open incision. The advantage is that the joint can be fully removed and flat surfaces are created for the fusion. It is also only possible to correct severe deformity using an open technique. Occasionally extra bone is needed at the fusion site. This can be taken through the same incision, or if more bone is required through a separate incision at the pelvis. As with any large open procedure, there is the potential for wound healing problems and postoperative pain. After an open fusion you will be in a plaster for 12 weeks and will not be allowed to weight bear for the first 6 weeks. The plaster will be from below the knee to the toes.

Alternatively, fusion can be done through an arthroscope. Using a ‘telescope’ to see the joint, the cartilage and bone can be shaved away using a high speed burr. The raw bone surfaces are screwed and held together by 2 screws inserted under x-ray guidance. The advantage of this operation is that the incisions are much smaller, and the pain is not usually as severe. Patients will spend 12 weeks in a cast, but are allowed to walk on the foot after 2 weeks.

After both operations, you will be seen in clinic at 2 weeks to have your stitches removed, and your plaster completed. An x-ray is taken at the 6 week appointment to check if the joint is fusing. At 12 weeks, the plaster is finally removed and as long as the bones have healed you are allowed to weight bear on the unsupported foot.

Following removal of the cast, the ankle is liable to swell and become a little more uncomfortable. A pair of flight socks may help reduce the swelling. The symptoms will gradually settle over the year following surgery. It will be at least 6 months until the benefits of surgery become apparent.

In the longer term, walking and golf are possible if the surgery is successful, but only the occasional person will be able to jog. You may walk with a limp, but this is usually less marked than it was before surgery, as a result of the reduced pain.

Following surgery, there will be limitation of the height of the heel that you can wear (usually less than 3cms). Some will find wearing a shoe with a stiff, and a curved, rocking sole will help walking.

The complications of fusion include:

Most problems can be treated by medications, therapy and on occasions by further surgery, but even allowing for these, sometimes a poor result ensues. 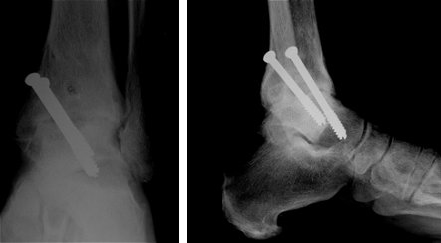 X rays of the ankle after successful fusion

3. Total ankle replacement:
Ankle replacement has been undertaken for many years. The initial attempts were unsuccessful and failed almost universally. Newer designs are more successful, and encouraging reports have been reported. Nevertheless this is not an operation for the young, athletic patient to return him/her to “normality,” it is a powerful technique to be used in selected patients. Your surgeon will advise you about your suitability.

The main object of the surgery is to relieve pain. It will restore some movement back to the ankle, and walking may improve; but only as a consequence of pain relief. The principle of the operation is to remove the worn out joint and replacement it with a metal surface on both the tibial and talar sides with a plastic liner sandwiched between them. The metal surfaces are bonded by a press fit to the bone, which allows bone to grow onto the back of the metal. This creates a very durable fixation. The plastic liner is flat on one side and curved on the other. The curve articulates with the metal surface on the talus. This allows the up and down, as well as the side to side movement, of the ankle.

Patients who are more suitable for replacement tend to be over 60 years old or have Rheumatoid Arthritis (or one of the other inflammatory arthritides). This is because ankle replacement is best suited to the less active patient with pain. Patients with rheumatoid arthritis are also suited to this option as they are often less active, and also have other joints damaged by arthritis in the foot, which would not stand up to the excessive stresses resultant on a fusion operation. Patients with arthritis of both ankles are also better suited to replacement.

If the ankle is very stiff replacement is less desirable as replacement does not necessarily increase the movement. Similarly if there is severe deformity or malalignment this may put extra strain on the replacement causing it to fail early.

Long term results for ankle replacements are not as good as those for hips or knee replacements. American studies show that 70-90% are still working at 9-12 years. The British experience show that at 5 years over 90% are still doing well. The success of the procedure for relieving pain is about 80-90%.

Following ankle replacement you will be in plaster for between two and six weeks. You will be able to walk on the leg after a fortnight. One of the major problems following surgery is swelling and poor healing of the wound, it is therefore very important to keep the foot elevated in the first few weeks after surgery.

The complications of the operation include:

The decision as to whether to undergo fusion or replacement is often straightforward, but on occasions is a matter for discussion between you and your surgeon. There is no “correct” answer; it is a matter of individual preference.

An X-ray and picture of a total ankle replacement: The ankle consists of two metal caps – one for the tibia (1), and one for the talus (2). The articulation occurs between the metal, and the plastic bearing (3).